The theme in Avery’s Kindergarten class this Fall seems to be Pirates. On the first day of school I found this hanging in the stairwell on the way to her classroom:

And when Avery came home from school that first day, she had a pirate hat tied around her neck, which indicated that she was a “Walker” and not a bus-rider.

And then there are the six gold coins. Every day each child in the class is given a strip of gold paper with six coins on it. When a child exhibits a behavior problem or fails to follow a class rule, an “X” is drawn through one coin. At the end of the school day, if all six coins remain unscathed on the strip of paper, the child’s name is put into a drawing for that day’s Treasure Box prize. I guess if all six coins are marked off, something horrendous happens to that child. Perhaps he/she is forced to walk the plank… or take a trip to the principal’s office (but I like my plank idea better!).

Of course, every day, Avery brings home one of these:

TADA! She’s a perfect little angel (we all know that, right??), and she’s even been lucky enough to have her name drawn for the Treasure Box prize twice already this year.

This evening, however, Avery sheepishly handed me this:

Avery was so ashamed that she showed it to me with a quivering lip and then took the paper to the trash can and said, “Mommy, I don’t want you to see that anymore!” She then brought me yesterday’s unscathed coins (pictured above) and said, “I just want you to look at THESE.”

Then she did this: 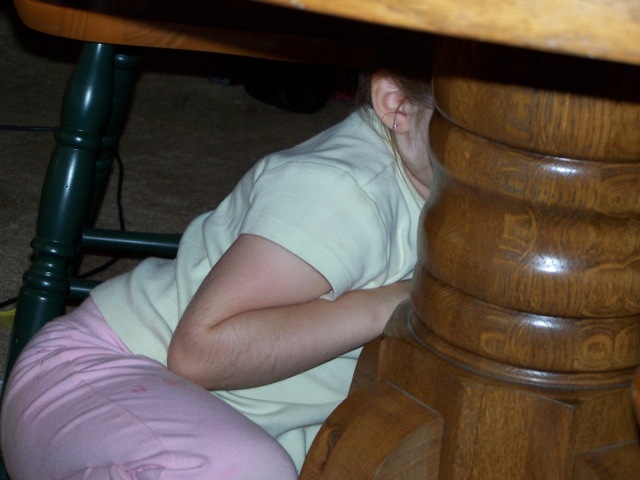 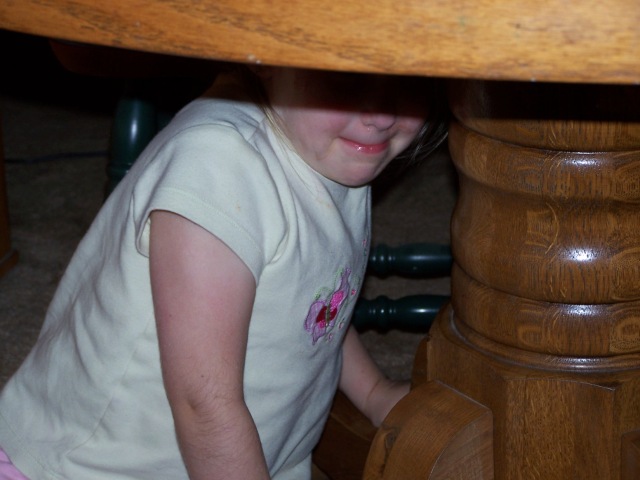 Yes, she’s hiding under the kitchen table, crying the ugly cry. Because two of her six coins were marked off today.

Of course, like any good mother, I was absolutely and positively AMUSED by all of this. And I was really curious about what heinous crimes my sweet little girl could have possibly committed at school today. Avery finally climbed out from under the table and stood before me… and cried some more. Goodness gracious. I think she’s scarred for life.

I’m still not sure what she did wrong. She told me that she was making faces at one of her classmates (she demonstrated by putting her thumbs in her ears, wiggling her fingers, and sticking out her tongue). So one “X” was for that. And she claims not to know what the second “X” was for. I was so enjoying her moment of shame and horror that I threatened to call her teacher tomorrow and ask what Avery did wrong if she didn’t tell me herself… more tears, more hiding under the table… and begging… “Please, Mommy, NO! Don’t call my teacher!”

She finally said she was ready to tell me… and said that she was making faces and talking when she shouldn’t have been. I simply can’t imagine a child of mine, who is so like me in every other way, getting in trouble for talking too much!! Unbelievable.

I’m not convinced that talking was the real reason she got in trouble, though… because I had kinda planted that idea in her head earlier when I was asking what she did wrong. She wouldn’t tell me, so I was listing off things (of course, talking was the first thing I thought of). I’m pretty sure there’s more to the story than she’s telling me.

I’m also fairly certain that she’ll bring home six unmarked coins tomorrow. If not, I suppose we’ll have to secure her a spot at the School for Wayward Girls.

This entry was posted in Avery, School. Bookmark the permalink.